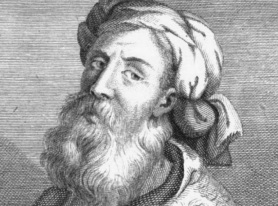 The greatest painter of antiquity, widely considered as the equivalent of Pheidias in painting, Apelles succeeded in depicting the perfect, with extraordinary realism, colours and symbolism, while excluding all hyperboles. Many of today’s most famous paintings are in actuality recreations of Apelles’ paintings.

His hometown was either from the island of Kos from Colophon. He studied art for 12 years in the Sicyon Art School next to multiple renowned painters of his time. From there he went to Macedonia, where he became acquainted with Alexander the Great. Apelles, together with Lysippus worked in the royal Macedonian court. Alexander also took him with him during his expedition in Asia. It is said that Alexander allowed only Apelles to portray him in paintings because of his remarkable talent.

Apelles was renowned for the richness of his colours. He created his own revolutionary method which consisted of mixing pigments out of plant extracts and burning of ivory, transfusing an unparalleled vividness and expressivity in his paintings. His art was praised by Pliny for its ingenuity and innate grace (ingenium et gratia). He pioneered the use of symbolism in paintings, being the first to portray allegories and personifications such as ignorance, contempt, sycophancy, justice and truth. He was hailed as one of the greatest painters by his contemporaries as well as being a perfectionist. Pliny, from whom we get a significant amount of information on Apelles, said that it was Apelles who surpassed all the painters that preceded him and all those that followed.

Although most of his paintings do not survive, there have been descriptions of them as well as faithful replicas. One of these is the mural in the house of Vetii in Pompeii depicting Alexander the Great battling against Darius in the Battle of Issus. It is based on the original painting by Apelles of Alexander wielding a thunderbolt in the image of Zeus found in the Temple of Artemis in Ephesus. Another mural found in Pompeii, that depicts the birth of Venus is based on Apelles’ Aphrodite Anadyomene (Venus Rising from the Sea). This painting served as an inspiration to a multitude of paintings during the Renaissance that revolved around the birth of Venus, including Botticelli’s famous The Birth of Venus. In a similar manner, Apelles’ Calumny became the basis for Zuccaro’s and Botticelli’s Calumny of Apelles. Other paintings include a portrait of Artemis surrounded by maidens based on an episode from Homer’s Odyssey, the Sacrifice in Cos as well as many other portraits of Gods and mortals alike.

Apelles’ legacy endured strongly during the Renaissance, which was a spiritual child of Hellenism. Numerous painters followed in his footsteps in an attempt to emulate him. The most notable example is Botticelli, who himself believed that he was the reincarnation of Apelles. It can be concluded that Apelles’ impact on the painters of the Renaissance was undoubtedly enormous, serving as their quintessence. He is depicted in Raphael’s The School of Athens, Willem van Haecht’s Alexander the Great Visits the Studio of Apelles and Apelles Painting Campaspe, Charles Meynier’s Alexander the Great Gives Campaspe to Apelles, Charles Beranger’s The Hemicycle and in Paul Delaroche’s The Hemicycle, where he is sitting on a throne in the center of an amphitheatre, in between Ictinus and Pheidias. Apelles is among the many great Greeks offering his tribute to Homer in Ingres’ The Apotheosis of Homer. His reputation as the one who perfected the art of painting has well withstood the test of time.