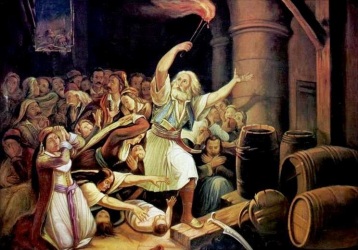 Christos Kapsalis was one of the most notable heroes of the Greek War of Independence. He was born in 1751 in Mesolonghi. He was one of the initial fighters who declared the war in Mesolonghi. Kapsalis was a flaming patriot and idealist who dedicated his entire fortune to the Greek War of Independence. He would always encourage the freedom fighters together with Joseph Rogon in between battles. He remained in history for his heroic stance during the sortie of Mesolonghi in 1826.

He participated in several important battles during the Greek War of Independence but his most notable one was the third and final siege of Mesolonghi in 182. On April 8th, 1826 when the defence of the city was no longer feasible, the last council was held to decide what would be done. It was agreed that Demetrios Makris, Kitsos Tzavelas, Notis Botsaris, Athanasios Razikotzikas, Nikolaos Stournaris and Alexander Mavrokordatos would lead the men and women who were able to fight, as well as children in a sortie in an attempt to save as many lives as possible. The issue that arose was what to be done with the elderly, the injured and those who were unable to fight. Kapsalis then proposed a plan to blow themselves up at the basement of his house, which served as a storehouse of explosives so that they would not be taken alive.

On the morning of April 10th, 1826, the gates of Mesolonghi opened and the freedom fighters commenced their exodus. They fought heroically until most of them fell in battle. Meanwhile, the Ottomans and the Egyptians had entered the city and began slaughtering its civilians. Kapsalis had gathered the elderly, the women, the children and the injured in the basement of his house and awaited the enemy to approach. When the Ottomans entered his house in search for treasures Kapsalis said «Μνήσθητί μου Κύριε» (God, put us in your memory) and threw the torch on the explosives causing a massive explosion that wiped out everyone, including 1000 Ottomans and Egyptians that were nearby.

Kapsalis’ act of bravery and the holocaust of the Mesolonghians shook up Greece and the entire philhellenic movement. Their sacrifice proved that the Greeks have retained an incredibly ancient value, their will to sacrifice even their lives in the name of freedom, the highest ideal of the Greek race.

One thought on “Christos Kapsalis”