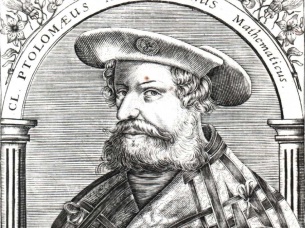 The greatest geographer of antiquity and one of the greatest astronomers who ever lived. Claudius Ptolemy was born in Egypt, where he remained active till the end of his life. His writings have had a profound influence on geography and mathematics. His book “Syntaxis Mathematica” has been described as the most important scientific writing ever written between the 2nd and the 16th century AD.

Ptolemy had founded observatories in several cities of Egypt where he studied the planets and the stars with specially designed astrologic tools. The astrolabe of Ptolemy as it came to be known was a genius astrological instrument which depicted the celestial sphere and was used to measure the longitude and latitude of the observed stars from anywhere on Earth and vice versa. In this way, Ptolemy could locate the position of any star in the night sky and also measure the distance between the sun and the moon. The Planetary Solar System was a geocentric astronomical model which depicted and forecasted the orbits of the sun, the moon and all of the known planets at the time. Upon it were implemented mathematical principles of Apollonius of Perga, Hipparchus and Ptolemy which made the geocentric model the dominant model up until the 16th century, when Copernicus re-introduced the heliocentric model of Aristarchus of Samos. Finally, Ptolemy used a parallactic instrument for measuring vertical angles of the moon and its distance from the Earth.

He wrote books on the physics, reflection and refraction of light, historical books, books on trigonometry, geometry and most importantly astronomy. His magnum opus “Syntaxis Mathematica” was the bible of astronomy that determined the astronomical perceptions of all humanity for as long as 1500 years. The book was translated by the Arabs into Almagest, which translates to “The Great” from Greek «μεγίστη» (megiste). In the Almagest, which is comprised of 13 books, Ptolemy introduces the mathematical models which he created in order to explain the motions of the sun, the moon and the planets based on his observations with his astrological instruments. He presents trigonometric principles, geometric applications, numerous astronomical phenomena and the zodiac signs. In addition, the book contains Hipparchus’ original star catalogue of 1022 stars now each with their own coordinates and magnitude added by Ptolemy. It is said that one of the agreements of the peace treaty imposed by Chosroes on Heraclitus was the deliverance of a copy of the Almagest to him. Another one of Ptolemy’s monumental works is “Geography” in which he provides a description of the known world with extraordinary accuracy. His book “Tetrabiblos” sums up all the Greek knowledge on horoscopes and is an invaluable tool for the field of astrology.

Ptolemy as an astronomer could be considered an equal to Hipparchus. Even though the geocentric model he proposed turned out to be false, it still retains its value for being a genius astronomical model for the interpretation of complex astronomical phenomena, as well as for being one of the most strenuous attempts to investigate all these phenomena based on mathematical principles, provided that the Earth be the centre of the solar system.