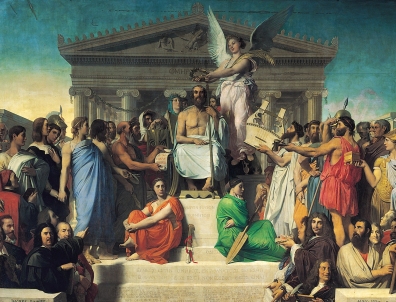 The Greek Anthology writes that Homer is “the ageless mouth of the world entire”. He speaks to the reader through his works, the Iliad and the Odyssey, to imbue them with a sense of magic and to invite them to delve into the world of Achilles and Odysseus. A world of terrifying cyclopes, seducing sirens and lotus-eaters. The world of the beautiful Helen of Troy and the fair Nausicaa; where Gods battle alongside humans and get injured and where ships are piloted not by human arms, but through the mind.

Homer’s elusive identity led many researchers to the so-called Homeric problems. Did Homer really exist and if so, were there more than one person hidden behind his name? What does his name mean, where was he born and when did he live? Was Homer blind? Were his poems disseminated verbally or were they written down? Where is the Homeric Ithaca and did Odysseus travel to the Atlantic?

The answer to the first question is affirmative. Homer did exist. His name is mentioned by numerous Ancient Greeks in their works. Plato writes that Homer has taught all of Greece, Heraclitus states that he is the wisest of them all while Euripides writes for him that he is the best and most divine of the poets. Pindar calls him the King of Poets. Aristophanes says that Homer taught virtues while Aeschylus confesses that his own poems are nothing but dust compared to those of Homer. Seven cities claim Homer’s birthplace: Smyrna, Chios, Colophon, Ithaca, Pylos, Argus and Athens. The most probable of these are Ithaca, Pylos or Argus, with Asia Minor being excluded because Homer lived before Asia Minor was colonized by the Greeks. This is evident from the fact that he does not mention any Greek city or activities of the Greeks there, aside from Troy. In his epics, many of the Ancient Greek cities are called with different, more ancient names, for example Delphi are called Pytho, Chaeronea is called Arne, Peloponnesus is called Argus and the river Nile in called Aegyptus. Most importantly, he ignores the destruction of the Minoan civilization, which conventional history places at 1620 BC and mentions 100 thriving Cretan cities, which would have been destroyed after the earthquake eruption. Hence, we can say that Homer lived before 1620 BC. The fact that he uses many words which had become obsolete by the 9th century also adds in favour to this.

Homer’s descent has long been a subject of study. According to Suda, one of the oldest surviving encyclopaedias, Homer is the son of Telemachus and Polycaste. There are numerous indications throughout the Odyssey that hint this, most notably the scene where Telemachus is bathed by Polycaste and which were intentionally put by the author. In addition, there exist a legend according to which Hadrian once went to the Oracle of Delphi to ask who was Homer, to which Pythia replied that he was the son of Telemachus and Polycaste. Homer is therefore the grandson of Odysseus. Odysseus wrote down his experiences during the battle of Troy and his journey home and passed this information to Homer through his son Telemachus. Homer, being an aoidos, composed the Iliad and the Odyssey in perfect dactylic hexameter and would travel to various cities singing excerpts of his works during celebrations. In the end, he would give them a copy of that excerpt. Homer travelled to many parts of Greece, teaching his works thus earning the title of teacher. Through his works, he managed to give all the Greek population a common foreground in education. Eventually, many manuscripts were lost and the excerpts existed separately from each other, until Onomacritus collected all of the excerpts and published them collectively as the Iliad and the Odyssey, during the 6th century BC by order of Peisistratus.

Homer was not blind. Even though Herodotus specifically states it in his writings, it is practically impossible for a blind man to write down everything that is written in both the Iliad and the Odyssey with such fine and scientific detail. The verbs he uses, the colours, the movements and the scenes which he describes are all so finely portrayed in each and every shade that leaves even the most observant person in awe. Homer saw as much as all the others did not.

One of the major subjects of study is whether Odysseus travelled to the Atlantic or just in the Mediterranean during these 10 years. This has been meticulously studied by several researchers but the one who stands out is Henriette Mertz, an attorney, code-breaker and researcher who in her book “The Wine Dark Sea” attempts to prove the fact that the Iliad and the Odyssey were not fictions of Homer, but actual events and that Odysseus crossed the Atlantic ocean and travelled to the Americas. Mertz conducted numerous voyages throughout the Americas and visited herself every location that she believed Odysseus did, having the Odyssey as a guide, in much the same way as Heinrich Schliemann had the Iliad when he discovered the ruins of Troy, which was believed to be merely imaginary prior to its discovery. There, she found thousands of artefacts with Greek letters, as well as pottery with Greek decorations. Moreover, she did research based on the astrological observations described in the epics. Mertz deduced that Odysseus had travelled to the Americas by means of the Gulf Stream as part of a mission. It is known from the Ancient Greek manuscripts that the Greeks had already been to the Americas and had founded colonies, most notably the Argonauts, who are mentioned in the Odyssey. For her work, Mertz was awarded by the Government of Greece.

The Homeric Ithaca is not the modern Ithaca. Its name is symbolic, and means to go and to come back (Ἰθάκη = ἴθι +ἄγε). For every individual, Ithaca is something different. Odysseus’ Ithaca was where he had begun and where he had to return so that he did not feel nostalgia anymore. The Homeric Ithaca most likely corresponds to today’s Cephalonia for numerous reasons, one of them being because in the Trojan War Odysseus leads the Cephallenians. Other equally probable candidates for Odysseus’ Ithaca are Leucas and Corfu.

The Iliad and the Odyssey were not disseminated verbally but written. They were written with Pelasgian alphabet in a time when the Greek language had reached perfection. The Homeric language contained therapeutic capacities with Homer’s and Hesiod’s works being used in antiquity to treat psychiatric disorders as told by Dionysius of Halicarnassus. Only recently did modern science come to verify what Homer and the Ancient Greeks already knew. The American Journal of Physiology published a research where they established the fact that reciting Homer has positive effects on the heart and the breathing by synchronizing both and helping the body find its “inner rhythm”. They concluded that they can be used to alleviate cardiac diseases. In addition, they increase the intellect and the cognitive function of students as well as used to treat dyslexia.

Homer is regarded as the eternal educator of all Greece. From antiquity, Homeric Studies comprised an important part in one’s education. Aristotle taught Alexander the Iliad and the Odyssey and it is said that Alexander slept with the Iliad under his pillow. He considered Achilles his idol and had succeeded in learning by heart numerous lines from it. Pythagoras credits Homer as his first teacher. Pythagorean arithmosophy can be traced within the works of Iliad and the Odyssey, thousands of years before Pythagoras’ birth. The works of Homer, Hesiod, Pindar, Bacchylides and Orpheus occupy a very special place in the Greek literature. Greeks from a very early age learned by heart excerpts from their works. The messages, the ideas and the symbolisms all passed down to their memories and were engraved in their mind. When they became men this information was activated by their soul and immediately they would enter the world of nous (νοῦς). Nous, that is the mind, would conceive this information and transform it into thought that guided the Greek to meditation (Διαλογισμός). Throughout the ages, the Iliad and the Odyssey have taught all Greek generations, eventually crossing the frontiers of Greece and spreading throughout the entire world, where they are still studied in schools and universities.

The Homeric Epics are not simply mythological stories. They depict actual events, blended with mythological elements which hide powerful symbolism and philosophy behind them. The epics acted as mystic educators that connected the reader, the meditator with the Divine by means of optic presentations in their mind. Homer has been called many things, from teacher to poet of the poets. All spiritual personalities throughout the ages have expressed their remarkable respect to him. Jean-Auguste Dominique Ingres in his painting The Apotheosis of Homer writes: “If Homer is a god, that one honours him among gods; if he is not, that he be regarded as one“.