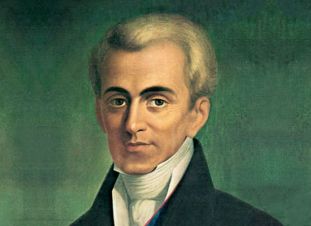 Ioannis Kapodistrias, the Saint of Politics as he is known in Greece,  was charismatic and illustrious statesman who, through his covert but decisive contribution to the Greek War of Independence and profound influence in the internal and external affairs of Greece led not only to the foundation of a strong, independent Greek nation, but also succeeded in transforming Greece to a country of European standards from the ground up in a time period of just 3 years. He is honoured in Switzerland and Russia for his contributions in their political and oeconomical system and is regarded undisbutedly as the greatest statesman in Greek history.

Among Kapodistrias’ most notable contributions and reforms are the following:

Kapodistrias devoted his entire life in reviving the Greek nation. He never married nor had any children. He would always pay the expenses from his own money and preferred living his life as a poor. It is well known that he insisted the money he was paid during his career as Governor of Greece to be given to the poor and that he get nothing. He fulfilled his oath and ultimately sacrificed his life for his ideas. Today, numerous statues of him can be seen throughout Greece, Switzerland and Russia commemorating the quintessence of a virtuous political figure.